Representation of women in advertising

Representation of women in advertising

This Clearinghouse Connector presents a selection of freely-available current research on the impact of advertising on women’s health and wellbeing.

We present case studies where individuals and campaigns have taken action against ads, current examples of promising practice from around the globe, and the importance of women in the control and creation of advertising. We then cover the current policy landscape in Australia, and provide links to related websites for further exploration.

Advertising that represents women as commodities – and which objectifies and sexualises women – perpetuates and normalises degrading and disrespectful beliefs about the role and value of women, and undermines gender equity measures. This representation of women has negative impacts on the mental and physical health of women, and how women are perceived by society.

The research presented in this Connector explores the gap between standards that advertisers have have set for themselves and the advertisements that appear. Promising practice from other developed countries demonstrates that there are various ways for governments at the state and national level to introduce regulation of advertising.

The Connector also presents research on the rise of online campaigns against sexist, misogynistic and objectifying ads that have appeared within the gap between industry guidelines, self-regulation and government oversight.

In gathering the research for this Connector, we have found limited publicly available academic resources. The majority of academic resources freely available to the public were produced prior to 2010, and have not been included in this Connector. However, there has been growth in practice-based reports and opinion pieces on the current state of advertising and strategies being used to end sexist advertising. 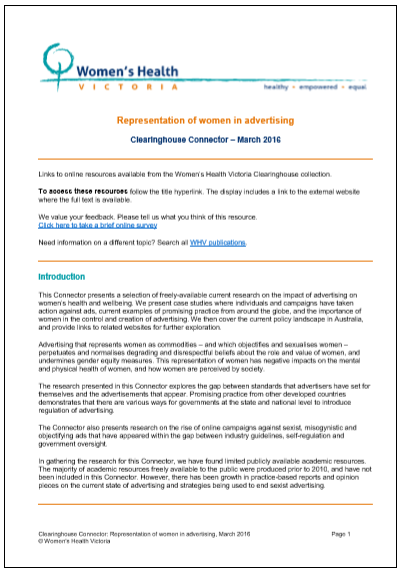