This Clearinghouse Connector provides details of up to date free resources focusing on women in clinical trials.

Women have been historically underrepresented in clinical trials for new drugs, treatments and devices in Australia and around the world. In instances where women have been present in trials, the influence of sex and gender is often not analysed and reported. The resultant lack of evidence around women’s experiences in clinical trials may have withheld effective treatment and exposed women to harmful side effects.

Reasons cited for excluding women include the perceived hormonal complexity of the menstrual cycle, and reproductive concerns regarding women of child bearing age (even if she is using contraception). When thalidomide was found to cause birth defects in the 1970s, women of child-bearing potential were banned from participating in clinical trials. Though this ban was lifted in 1993 and the US mandated the inclusion of women in such trials for government-funded research, drug companies (who fund the majority of trials) were not required to comply.

Progress towards adequate representation and analysis of women in medical research continues to be slow. In 2014, it was still reported that from animal trials to human trials, “[t]he science that informs medicine – including the prevention, diagnosis, and treatment of disease – routinely fails to consider the crucial impact of sex and gender.”

In 2008, a report found that Australian human rights and ethics committees (HRECs) did not enquire as to the numbers of male and female participants in clinical trials and had no set questions about sex dimensions of research in application forms. The same report showed that opinions were also divided on whether research cost and convenience justified excluding women from research. As it stands, the Australian National Health and Medical Research Council (NHMRC) currently has no policy comparable to those of the US National Institute of Health (NIH) or Health Canada on requiring studies to test on both men and women. 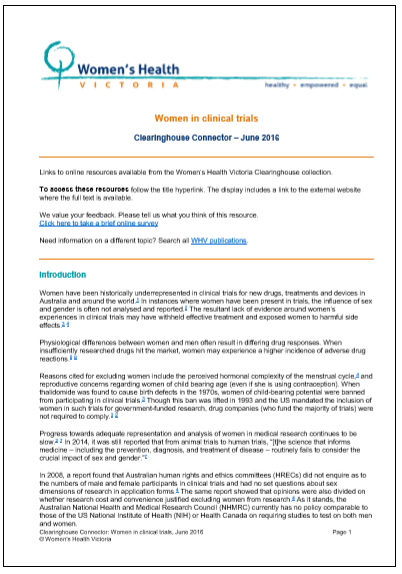