Spotlight on women and self-harm

Spotlight on women and self-harm

This Spotlight features a list of up-to-date and freely available research and resources on the topic of women and self-harm.

Self-harm is the act of deliberately hurting one’s own body, and includes cutting, biting, burning, poisoning and scratching. Women are more likely to self-harm than men and are at risk of starting to self-harm from early adolescence. They are more likely to hide their self-harming behaviour and injure themselves in places on their body that can be easily covered.

The Australian Longitudinal Study on Women’s Health found that 45% of Australian women aged 18-23 years reported ever self-harming. Young women make up a significant proportion of self-harm-related hospitalisations. Aboriginal and Torres Strait Islander women are hospitalised for self-harm at twice the rate of non-Aboriginal women and hospitalisation rates generally increase with level of disadvantage and degree of remoteness. Self-harm rates are high for young women with a mental illness including depression, anxiety, post-traumatic stress disorder, and eating disorders. It is a diagnostic feature of borderline personality disorder. Trans youth also have high rates of self-harm.

Due to the stigma associated with self-harm, many women do not seek treatment. Suicidal behaviour and self-harm in women can be viewed by family, health professionals and the community as attention-seeking, manipulative and non-serious, which can negatively influence how young women are treated. In Australia and internationally, self-harm in young women is on the rise, highlighting the need for widely available, gender-sensitive treatment which addresses coping behaviours as well as the reasons women turn to self-harm. With effective treatment, and if the underlying distress is managed, it is anticipated that self-harming behaviours will likely remit. 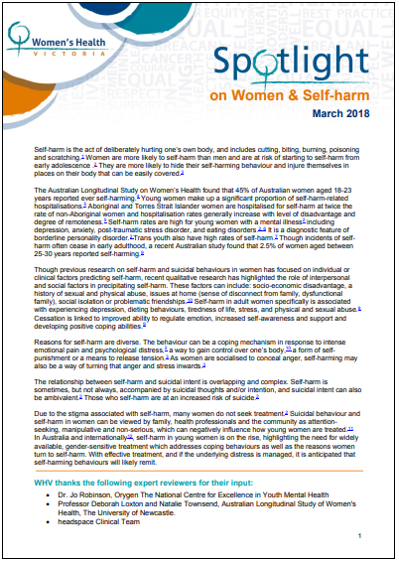