Spotlight on alcohol and women's health

Spotlight on alcohol and women's health

This Spotlight features a list of up-to-date and freely available research and resources on the topic of alcohol and women's health.

Alcohol is the most commonly used drug in Australia.  Alcohol consumption increases the risk of health problems including cancers, brain damage, liver disease and heart disease.

While men are more likely to drink at ‘risky’ levels than women, women’s rates of alcohol use and related harms are catching up with men. Women start to experience alcohol-related health problems sooner and at lower drinking levels than men.

Overall, increases in women’s alcohol consumption have also been attributed to changes in gender roles and women’s increasing workforce participation and wage earning. While the literature tends to focus on the harms of women’s drinking, there is a lack of research on their motivations for consuming alcohol.

Different expectations apply to men and women in relation to alcohol consumption. While men’s behaviour is more likely to be excused, women are judged more harshly on behaviour and appearance if they have consumed alcohol.

Barriers women face in accessing treatment include social stigma, childcare concerns, fear of losing their children and the lack of gender-sensitive treatment programs. 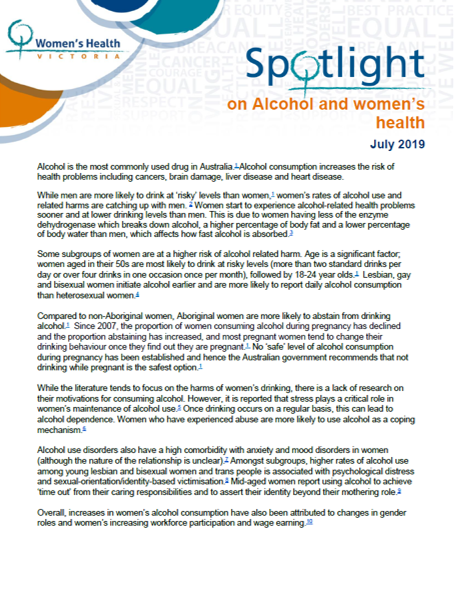